This is the first proper Hyundai performance car. There have been efforts before – mildly hot hatches and big-bumpered F2 editions of the pretty '90s Hyundai Coupe – but nothing with circa 300bhp and a development programme overseen by a former BMW M boss.

The i30N has been developed at a depth far beyond any quick Hyundai before it, and you’ll tell before the wheels have turned an inch. An illuminated rev counter whose redline shifts as the engine warms up, the ability to channel your favourite mix of chassis settings into one button press, a manual gearbox and handbrake… this is a car that’s been honed by bona fide driving enthusiasts without yielding to the needs of marketing departments and the like.

The churlish among you might point out many of those nods are nicked wholesale from BMW M cars of the last decade. We’d respond by pointing out there are worse places to take inspiration from, and that Hyundai’s N boss Albert Biermann – as a former M Division chief – is perfectly entitled to bring the best bits of his old workplace across to his new one. Rumours he also took a bagful of Sharpies and file dividers from the stationary cupboard on the way out? Neither confirmed nor denied.

HOW DOES THE I30N STACK UP ON PAPER?

So, the i30N’s spec. It won’t win a game of Top Trumps, but in an increasingly mad hot hatchback market, there’s lots to like about that. Its 2.0-litre turbo engine drives the front wheels only, through a standard six-speed manual gearbox.

Upon launch, you had a choice of two specs – a base car with 247bhp, sports seats, a full suite of adjustable driving modes and launch control. Another £3,000 (RM17k) snared you a Performance Pack with a rowdy sports exhaust, a limited-slip differential for more precise handling and 19in wheels with stickier tyres, as well as another 24bhp. 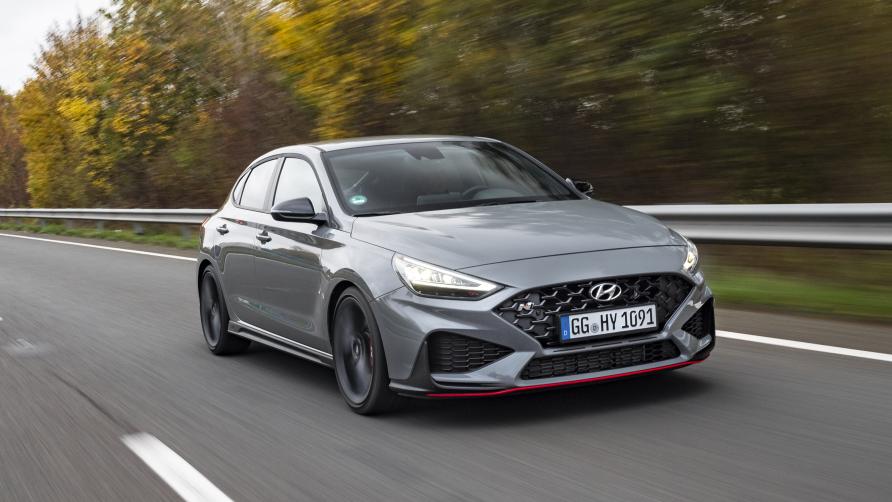 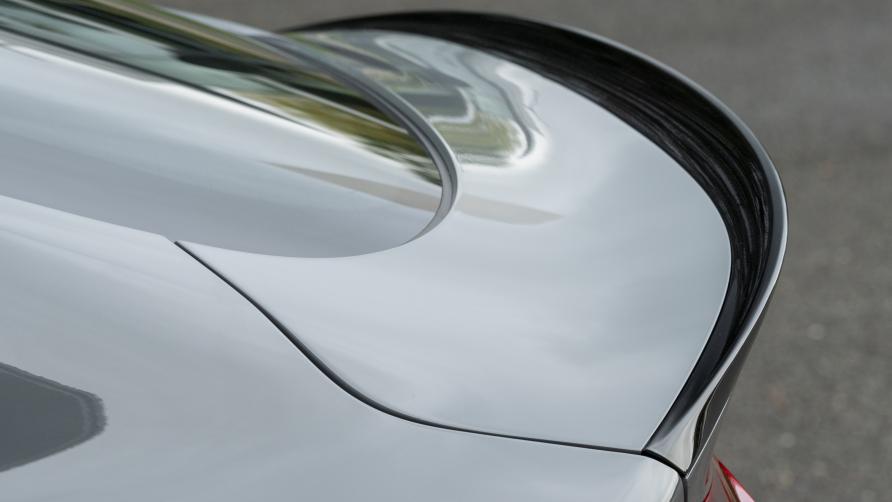 ANY CHANGES SINCE IT WAS LAUNCHED?

It proved such good value, that for the i30N’s mid-life update, Hyundai ditched the base model in the UK. It also boosted the remaining model’s power (up a modest 5bhp, to 276bhp), stripped a bit of weight, gave it stronger brakes and new tyres and added the option of – shock! – an eight-speed paddleshift gearbox. New head and taillights and larger exhaust pipes seemed almost token when the rest of the facelift was so thoroughly considered.
Oh, and if a sensible old five-door isn’t quite your style, the i30N also comes in Fastback form, pictured in the gallery above in grey. It’s still a hatchback, but has been designed to resemble a saloon car. It’s Hyundai’s attempt at cracking the Mercedes CLA market, and adds £500 (RM2.9k) to the asking price, but brings more boot space with it.

There are few other hot hatches that demonstrate such a transformation over their base car. The regular i30 is competent, but sensible to the point of anonymity. The i30N is fast, fun and capable of bringing your inner scamp to the surface mere metres after you’ve pulled away. Just like all great hot hatches. And make no mistake, this is a great hot hatch. Whichever body shape or gearbox you go for. Just prepare for slightly chunky fuel bills… 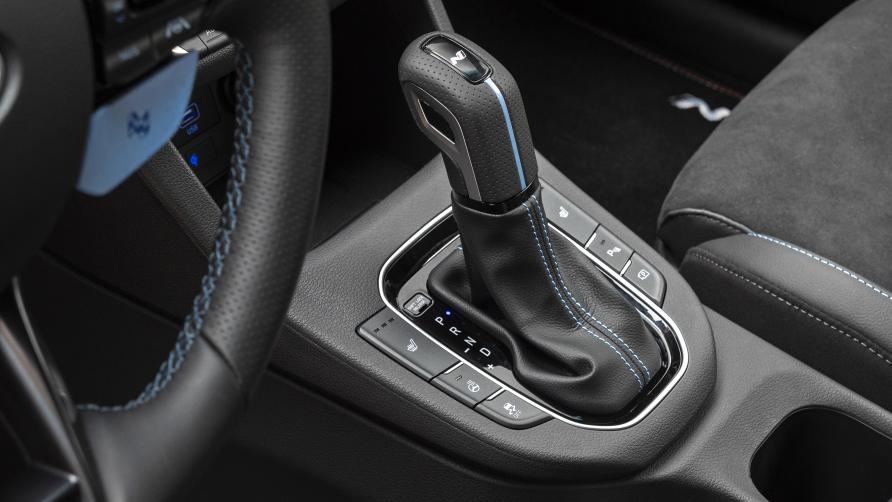 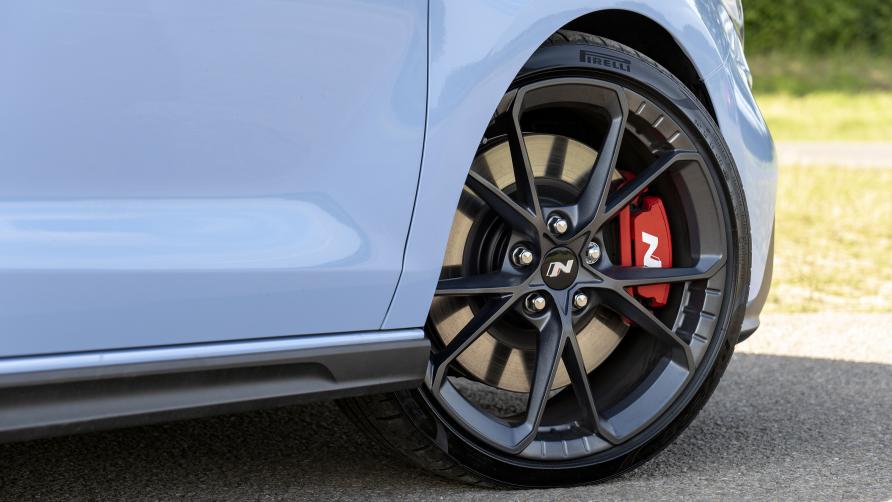 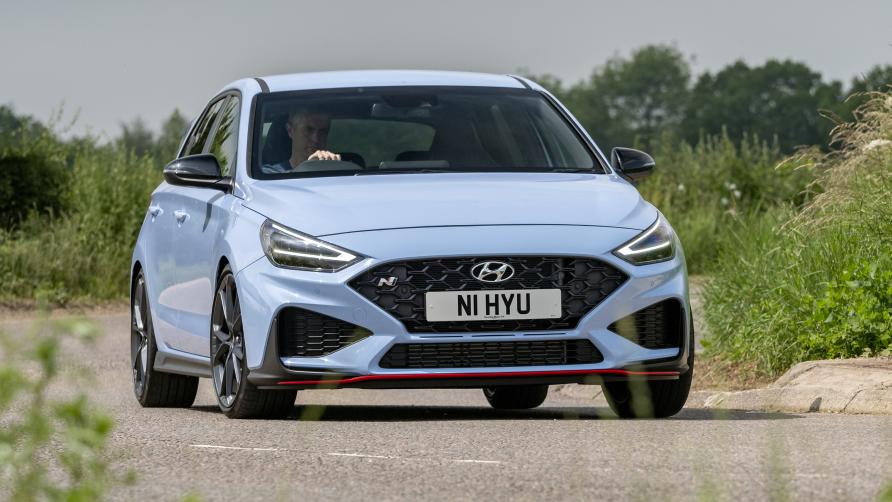 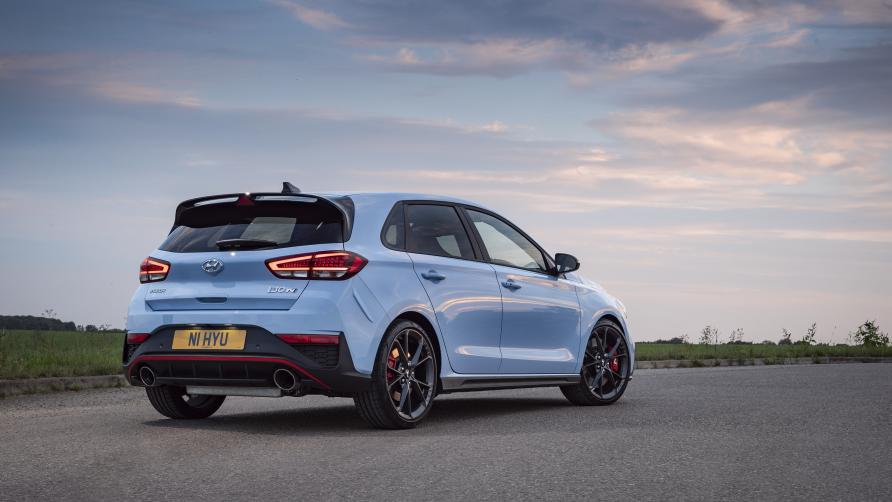 Sure, its outright performance figures lag behind a Honda Civic Type R or Renault Megane RS, but that’s not the point. The N may partially stand for Nürburgring, but Hyundai didn’t go chasing lap records there. The i30N prioritises fun over outright grip and ability.
Here’s a car that’ll give you a bit more torque steer than its rivals, a more fidgety ride over rough surfaces and a scrabble for grip when the conditions are sub-par. It’s rougher round the edges, but that’s its making: it’s a vastly more involving car at moral speeds than competitors whose limits sit uncomfortably high nowadays.

It eggs you on, lifts your mood, and livens up any stretch of road. Importantly, it lets you impose your own driving style upon it; some hot hatches demand you make allowances for their overpowered and slightly frenetic front axle, others have a chassis that shines in specific circumstances but are a bit plain if you’re not at maximum attack.
The i30N responds faithfully to whatever you throw at it. If you want really impressive stability in high-speed corners, it’s got it. If you’d like to lift off into a damp second-gear corner to feel the rear pivot around, it’ll do that too. In all circumstances, the exhaust crackles away on a trailing throttle to widen your grin further.

WHICH GEARBOX SHOULD I HAVE?

The standard six-speed manual gearbox – still the enthusiast’s choice – comes with rev-matching. It’s one of the very sharpest examples of the tech out there, but you can also turn it on and off with one simple button. While other manufacturers only let you use their rev-matching when the stability control is on – then only let you heel-and-toe yourself with the nannies off – Hyundai lets you use the system on your own terms. Simple, but you can tell it’s been considered carefully.
The eight-speed automatic isn’t one to immediately shun, though. Much like the car as a whole, Hyundai’s knocked it out the park right from the off. The fact you get a nice, big physical gear selection knob that physically clicks between P, R, N and D is a strong start, when too many of the i30N’s rivals have tried something gimmickier. The paddles are small and fixed to the wheel – as opposed to being fixed on the column – but their reactions are quick and there’s a bunch of little extras that come attached to ticking the options box.

‘N Track Sense Shift’ ensures the car’s extremely smart at doing its own shifts when you’re driving quickly but not pulling the paddles, while ‘N Grin Shift’ gives you 20 seconds of the i30N’s gnarliest acceleration at the touch of a button, just like Porsche’s ‘Sport Response’ setup. While it's clear N division's naming department is working on commission, the actual functions give the twin-clutch automatic something to shout about over the manual.
Whichever transmission you go for, though, this is not an especially thrifty car to run. Hyundai may claim over 12.8km/l but you’ll be light footed or regularly on long journeys to regularly see that. Really mischievous behaviour will see your average fuel economy plunge into the low 20s. In a twist of fate, uncommonly efficient performance cars are something BMW’s suddenly become rather good at… 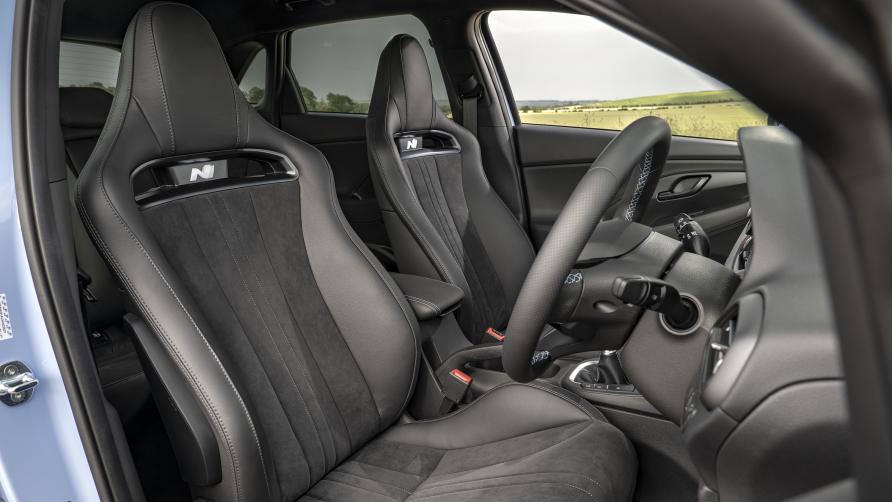 It’s lighter and brighter in here than the i30N’s myriad rivals from the Volkswagen Group, with flashes of baby blue used just the right amount.
The ergonomics have been nailed, too: clearly benchmarked on some of those VWs, with an easy to use touchscreen (much wider in the facelifted car), simple CarPlay connection and a bunch of driver aids that deactivate with straightforward button presses. Actually, it’s better than a VW in here these days, now the Mk8 Golf (and its various Seat and Skoda spin offs) have gone for an overly touchscreen or voice control direction. Important stuff like climate controls have remained physical in here, rather than being buried too deeply in the screen.

If that all sounds too sensible, then keen mimers of oversteer will enjoy a strut brace in the back (which doesn’t affect the i30’s practical boot or seating for five), front seat squabs that slide fore and aft (like in a BMW), and the ‘N’ performance button on the steering wheel that brings your favourite of the myriad drive and chassis settings together in one quick press (like an M car).
Like all the best hot hatches, it’s plenty practical enough in here to swallow most of the prosaic bits of everyday life. The swoopier Fastback version actually brings a whole 69 extra litres of luggage room, too.

NO DIGITAL DIALS, THOUGH?

Newer N division cars get them, but the i30N has analogue instruments for now. The chintz is all saved for the middle screen. The car’s mid-life update has brought a bigger display and much better graphics, including a very clever way of pulling together your favourite combination of driving modes. Given there are almost 2,000 possible combos, that’s welcome. You can even set up one of those mock log fires on the screen – complete with ambient noise – should you want to pop everything back into ‘comfort’ and just relax.
Not your thing? Then spec its superb optional sports buckets, which save 1.1kg apiece over standard but then add a few grams back in with illuminated N badges that’ll sit between your shoulders as you drive, serving no real purpose. Another M Car touch Biermann appears to have brought with him... We’d still have them, though. 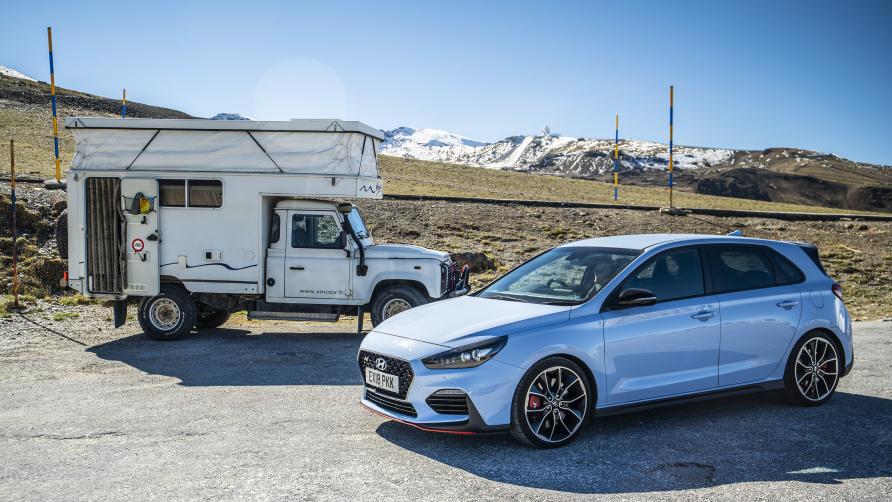 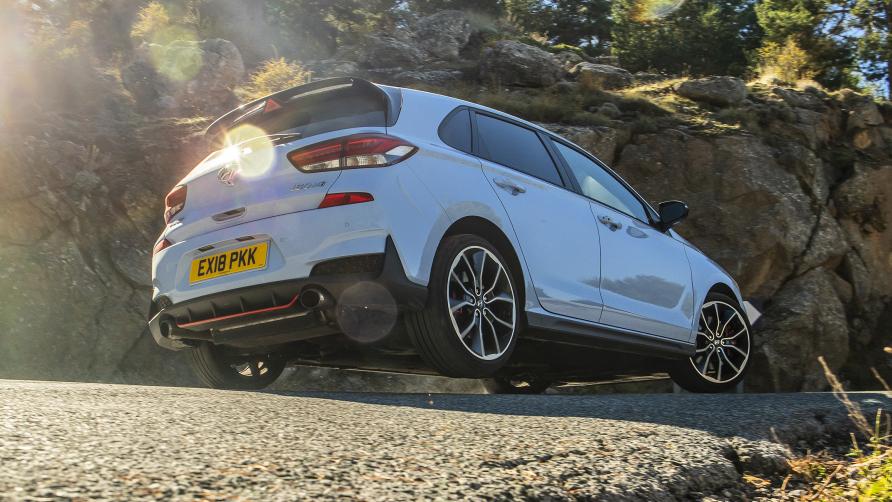 BUYING-WHAT SHOULD I BE PAYING?

The i30’s already impressive five-year warranty also includes track use with the N, which is simply unheard of. It has the potential to be financially crippling if enough people go overrevving their engines on Friday evenings around Bedford, but Hyundai’s clever: encourage people to razz these around on circuit and you’ll suddenly have a paddock normally dominated by Caterhams, 911s, Elises and RenaultSports with a group of Korean hatchbacks scattered throughout it, too.
Way to convince petrolheads your car is made of the good stuff, then. The fact one of the most fun full-size hot hatches on sale is also the easiest to justify from a warranty perspective feels borderline silly, but that really is the case.
We lived with an i30N for close to a year, and in all honesty, fell head over heels. But there were a couple of issues using one as a daily driver. Its relatively small fuel tank and typically high-8.5km/l meant it’d only just manage 483km on a tank, and usually only by playing chicken with the fuel light for a handful of that distance.

WHAT AM I PAYING?

When the i30N first launched, a base 247bhp car was £24,995 (RM144k). Which is what the dinkier i20N now commands. Now that Hyundai’s added more tech, dropped the entry model and inflation has taken its toll, you’re now looking at a £33,745 (RM194k) base price. That’s still decent among its rivals, and you can lease one from around £360 (RM2k) a month. The DCT gearbox adds £1,950 (RM11k) to the list price, or around £50 (RM287) a month.
Buying a pre-facelift i30N on the used market? The entry-level car comes with most of the sensible equipment you could ask for – sports seats, sat nav, an array of active safety systems, 18in alloys – with its 2.0-litre turbo engine producing 247bhp. The i30N Performance adds 24bhp, an electronic limited-slip differential, a quite juvenile (but hugely fun) sports exhaust, larger 19in alloys with Pirelli tyres and electric seats trimmed in higher quality materials. It’s a no-brainer if you want the most satisfying driving experience possible and given how many more of these sold than the base car, there doesn’t appear to a price premium second hand.