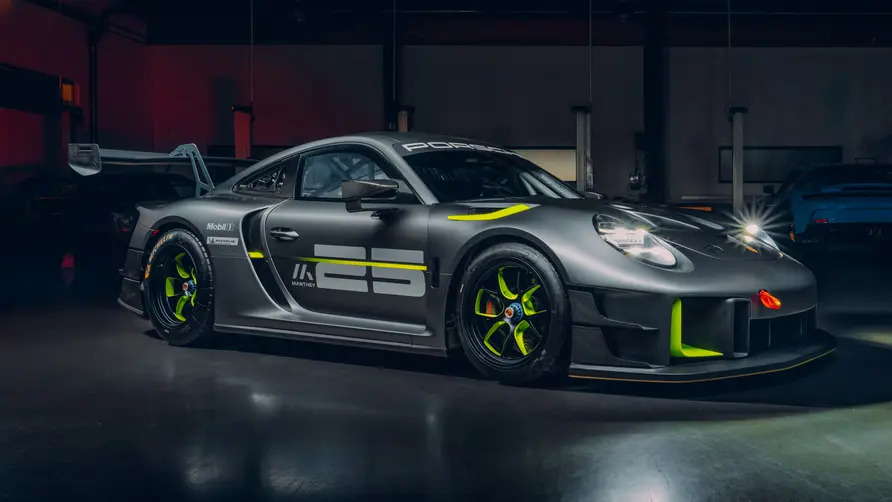 This is the Porsche 911 GT2 RS Clubsport 25, a long name for a car that celebrates a long history. It’s yet another track-only Porsche 911, built in collaboration with Manthey Racing to celebrate the team’s 25th anniversary, and it’s a special bit of kit. Sold-out kit, mind.

First announced last year, Porsche has now confirmed to TG that the limited run of 30 cars has been accounted for, so these new pictures might just be your only chance to check out the track honed GT2.

Underneath sits the base of the 991-generation (spoiler alert!) GT2 RS Clubsport. Which means a 3.8-litre twin-turbo flat-six kicking out 690bhp. That’s matched to a seven-speed PDK ‘box and rear-wheel-drive. One suspects pace won’t be a concern.

From there, Manthey steps in, because this CS 25 takes inspiration from the team’s 911 GT3 R racer which Nürburgring enthusiasts have affectionately nicknamed ‘Grello’, thanks to its green and yellow colour scheme. You’ll spot subtle accents dotted around the CS 25’s flanks that pay tribute, which is smart.
There’s a centrally mounted radiator just like in the GT3 R, a new front apron with double flics and a closed underbody. Other 911 GT3 R nods come in the shape of a redesigned carbon fibre front lid with two large vents separated by a central divider, plus a NACA duct that feeds air into the cockpit.

Further cues are pinched from the new 935 – flared arches that vent out exhaust air, 18in wheels that offer up a wider track than the ‘regular’ GT2 RS CS, along with control systems and steering gear. There’s a swan-neck rear wing that’s “particularly wide”, new rear vents and a Manthey-optimised rear diffuser.

A final flourish arrives from Porsche’s Big Dog: the headlights on the CS 25 come via the Le Mans-winning 911 RSR, though slightly modified for this use. Much like the 911 RSR, you’ll probably be seeing these flash you on a track many, many times over. Best just move out the way quick.

“With every modification, technological function always takes priority,” explains Manthey Racing boss Nicolas Raeder. Sure, but it also happens to look very punchy indeed. Punchy price, as you’d expect - €525,000 (RM2.3m) plus tax, but then it’s moot, because they’re all gone.