Check out Singer’s first reimagining of the Porsche 911 Turbo... Cabriolet

Check out Singer’s first reimagining of the Porsche 911 Turbo... Cabriolet 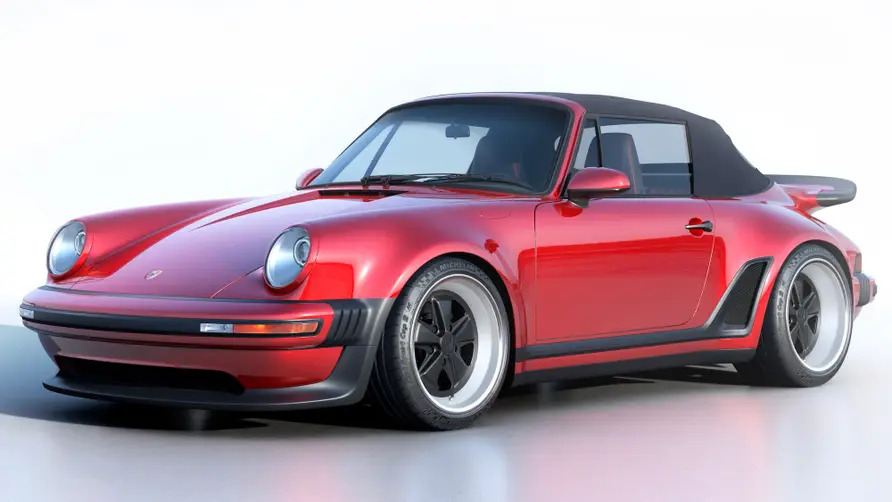 This is a bona fide Porsche 911 Turbo, with a 503bhp, twin-turbo flat six sending all of its horses through a six-speed manual to the rear wheels. And that’s something that most around here can agree is a good thing. It’s the work of Singer Vehicle Design, which is equally popular around these parts. But it’s also a 911 cabrio. Opinions rather diverge from there.

It’s also the first cabriolet to emerge from Singer Vehicle Design, despite its decade-plus history on the world stage as a purveyor of perfectly polished Porsches. Well, technically ‘reimagined’, but that’s rather less alliterative.

Legalese and literary devices aside, what a thing to behold. If you were a fan of the Porsche 930 growing up, a) we can relate, and b) we can confirm that the sight of the whaletail spoiler, flared rear fenders and Fuchs-style wheels is enough to do funny things to our insides as well. That’s all made from carbon fibre, because Singer, and painted in ‘Cadiz Red’.

But as much as the 911 Turbo cabriolet was about classic 911 looks, or proving / faking that you’d made it, it was still very much a... well, turbocharged 911 underneath, floppy top or otherwise. So to pay homage properly means proper turbo power. And wouldn’t you know it? Singer’s just segued from its ‘Classic’ reimaginings to something called a Turbo Study.

While that sounds like something you’d name your home office in 1983, it refers to a new run of Singer-fettled magic powered by a turbocharged, 3.8-litre version of the Mezger flat-six. And it also means getting the old wide-body 911 Turbo proportions bang-on – no mean feat when you’re starting with a 964 cabrio. But this is Singer we’re talking about, after all.

As befits a such a custom creation, the 3.8-litre can make anything from 444 to 503bhp, and channel that through two or four driven wheels. Singer also offers carbon-ceramic brakes and will tune the suspension to suit anything from “long-range, high-speed touring” to an “overtly sporting focus”. And just what makes a perfectly reimagined 911 Turbo to you? Well, we expect opinions to diverge from there.