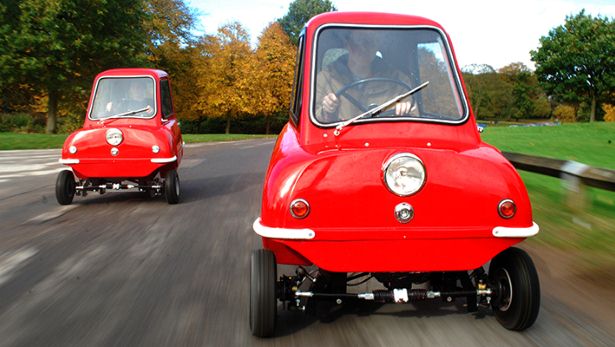 It's the smallest car in the world!
It is indeed. The Peel P50 ought to be familiar from its appearance on TG several years ago. Its fame has continued since, and one Dragons' Den appearance later, production of the P50 - and its sportier Trident sibling - has restarted in Nottinghamshire.

As well as the classic 49cc moped powered version, there is now an electric variant. Its motor sends 3.35bhp to the rear wheel - the same as the petrol version - and with a little less weight to shift, it hits a marginally higher 31mph top speed. So long as you've had a light breakfast.

So why electric?
For starters, something as diminutive as the Peel - it's 1.3 metres long and weighs around 150kg - is a prime candidate for electric power, especially given its circa 20-mile range is less of a hindrance than, well, all of its other attributes when it comes to making long journeys.

More pertinently, though, the P50's newfound target market ought to be very receptive to a silent, emission-free iteration. Since its telly appearances, museums the world over are seeking a working example of the world's smallest car, and one shorn of CO2 emissions is all the more acceptable for running indoors.

The P50's other big customer base is the completist car collector, with demand coming from countries far and wide. Electrical power allows for road legal registration in the USA, while the Crown Prince of Dubai, who has apparently ordered ten, can run amok inside his mansion with an unlikely one-make race series. If he's as childish as us.

Is it any good?
Normally a road test would weave its way through such fripperies as 'braking', 'performance', 'suspension' and 'handling'. The P50 doesn't really have any of these things.

It drives like any other EV or automatic car, with a brake and throttle. The former has no progression, but the latter produces thrust so modest that unless you're heading downhill, lifting off the right pedal should produce enough retardation for whatever obstacle you may be gently approaching. There's a reverse gear now, too...

With reborn Peels possessing a heavier, more reinforced chassis structure - including engine mounts from a Ford Fiesta for the petrol to keep weight low and stable - there's no impending feeling of doom as you make progress, with the only sense of instability coming if you weave around like a tyre-warming F1 driver.

The steering rack has a much less severe ratio than before, and the whole process of piloting the electric P50 is as simple as driving a roofed dodgem. There's even a go-faster button amusingly labelled 'NOS' for if you're keen on heading north of 20mph. We managed around 25mph (which felt like 75), suggesting a diet is in order to touch that 31mph VMAX.

Of course, the relevance of performance and handling ability in a car so single-mindedly novel is negligible. Many customers may intend to never drive their P50 more than a few feet. But when they do, we imagine they'll beam from ear to ear and head off on a course longer than first intended.

So how much does it cost?
Bucking the trend you'll find in 'normal' cars, the electric P50 is a few hundred quid cheaper than its petrol equivalent, starting at £12,999 plus VAT. With any rationality applied, £15,598 is an awful lot of money for a one-seat car barely more substantial than its driver, but it's a small fraction of what you'll now pay for an original, classic P50, and production will be limited to just 50 units.

What else is worth a mention?
Each P50 is built to order, and you can have your fibreglass body in one of five colours, including the cleverly named 'Dragon Red'. Electrification is possible for the bubble-roofed Trident 'sports car', too, which remains the Peel to buy if you have a friend.

But for those of us watching from the outside, there's little to titillate more than the P50 and its barely believable dinkiness. And there's something of an inherent rightness to it pootling around to an electrical whine akin to a remote control car. Unless you need enough range to complete the Isle of Man TT course, that is...